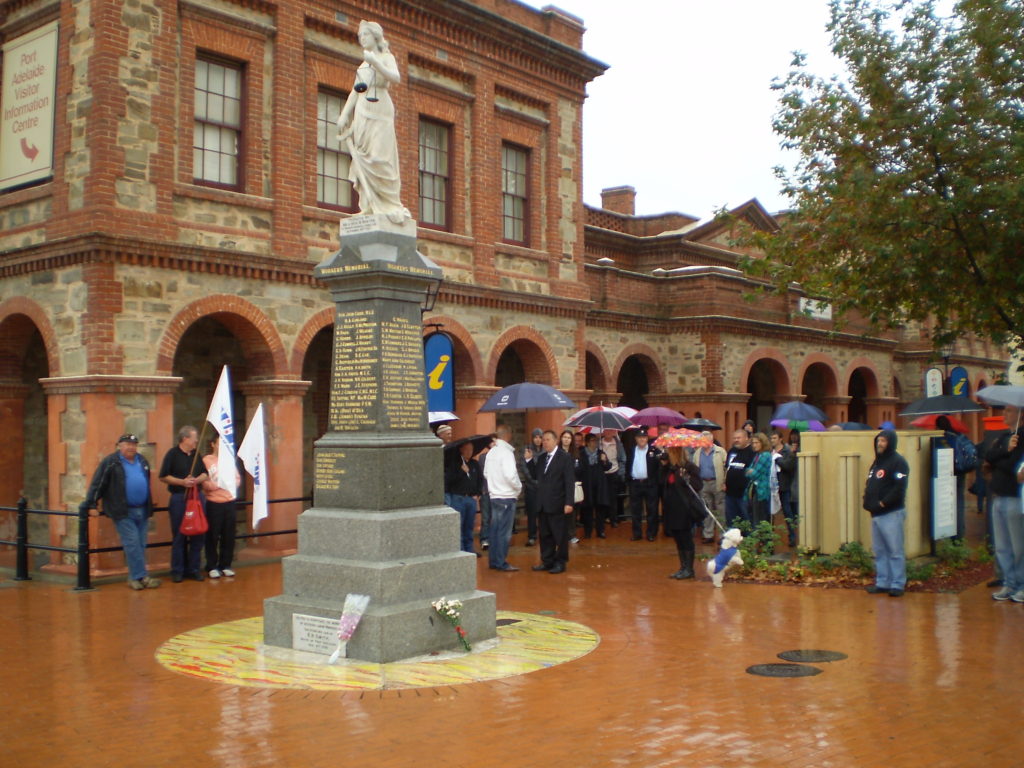 One does good, neither from fear of punishment nor promise of reward, but because good is good to do. They were the sentiments of the nineteenth-century American Rationalist, Colonel Robert Ingersoll, whose writings would have been popular with some the people whose names went on to the Workers’ memorial. We can be certain that all of them had lived according to that point of view. None of  them behaved as they did with any thought that they might be honoured in any way other than the respect of their friends, neighbours and workmates.

That is why it is an honour to be at the Port as your guest on May Day to reflect on their lives and the importance of this monument.

We gather in the shadow of Anzac Day and of International Workers’ Memorial Day. This event brings the two commemorations together. Looking back to the establishment of this memorial between 1917 and 1921 we see a period of intense propaganda in support of King and Empire.

It is often forgotten that war is work for capital. Slogging in the trenches for the capitalist state is as much a form of wage-slavery as is laboring on sites for a particular capitalist.  Eight of the forty-one original names were of local workers who had been killed in the war. In one sense then, this workers’ memorial is also a war memorial. But I suggest that all the war memorials are also memorials to the working people whose lives and limbs were lost in the service of capital. Those monuments are are ours too.

During the 1971 Moratorium March in Newcastle, the thousands of workers paused at the small war memorial outside the Post Office in Hunter Street. An elderly miner spoke: ‘When I was a lad I was silly enough to volunteer to fight for the British Imperialists. I’m proud to say that my son fought in the anti-fascist war. We’re both here today to make sure that my grandson is not conscripted for the imperialist war in Vietnam’. As anti-imperialists, part of our task is to make the experiences of three generations part of every Anzac Day.

Adding the statue of ‘Justice’ with her scales of equality was another call to arms. Those scales can never be balanced in a class society. We have a horrible reminder of the law as a regime of injustice in the 2004 murder of Daniel Madeley. I say ‘murder’ even though Marx explained why  ‘killing is not murder when done for profit’. Similarly, the escape of the directors of Hardie’s on yet another of those legal technicalities is proof that capital gets away with mass murder. As one of the asbestos widows put it: ‘There is no appeal from the grave’.

The bias built into bourgeois law is written all over the persecution of Ark Tribe by the Building and Construction Commission.  It pursues workers trying to enforce Health and Safety regulations but turns a blind eye to the violators. To make matters worse, the anti-labour party government is harmonising OH&S down to the weakest common denominator.

Hence, the necessity for Justice to have a sword. Under the rule of capital, that defensive weapon is a militant union movement. The significance of organised labour was voiced in 1916 by a Hobart labourer, Samuel Champ:

Our liberties were not won by mining magnates or stock-exchange jobbers, but by genuine men of the working-class movement who had died on the gallows and rotted in dungeons and were buried in nameless graves. These were the men to whom we owed the liberties we enjoyed today. Eight hours and other privileges in Australia had been won by men who suffered gaol and persecution.

Shortly after Champ’ s speech, our liberties were protected by the defeat of the two plebiscites to impose conscription for overseas military service. The labour movement knew that industrial conscription would follow. According to the Solicitor-General, the War Precautions Act already meant ‘that John Citizen was hardly able to lift a finger without coming under the penumbra of some technical offence’. How appropriate then that we are meeting in the courtyard to the prison cells where militants were held.

Among the victims of this repression were ‘the IWW twelve’ jailed for arson. All but two got early release after a Royal Commission. That investigation was one achievement of the Industrial Socialist Labor member for Broken Hill, Percy Brookfield. Brookfield held the balance of power in the NSW parliament. To cling to office, the Labor cabinet gave way on the IWW and on OH&S for Barrier miners.

Percy was on his way to Sydney via the Port when ‘he died for his people’ at Riverton in March 1921, ninety years ago. He had often passed through here and no doubt many locals wanted to add his name to the memorial. He has his own in the Broken Hill cemetery and now Paul Adams’s biography is now available with that stunning title – ‘The Best Hated Man in Australia’.

Percy Brookfield was special. However, until 1915, he was just another miner and unionist. Similarly, Ark Tribe had been an everyday builders’ labourer for twenty-three years before he took his stand. The same is true of the Eureka rebels. They were not saints or angels before November 1854. People rose to the struggle in1929 here and again in 1998 against Patricks. Stories about past effortrs encouraged them to say: ‘We could do that!’ And they did.

Women have always done so too. Yet only one out of the forty-one names in the first listing was of a woman, Christina Fox. More have been added, for example, the Aboriginal activist, Ruby Hammond. Yet there were many, many more who were busy behind the scenes – ‘Because that’s what women do’, to quote a line from the 2004 musical Eureka! They ‘did good because good is good to do’. Researchers are finding more of their names for you to consider adding.

However, we need to remember that we are surrounded by memorials to working people wherever we go. A plaque to the architect of St Paul’s cathedral in London, Christopher Wren, reads ‘ If you seek his memorial, look about you’. An avalanche of capitalist propaganda makes it hard for us to recognise the memorials to workers that are all around us. The first ticket-holder in the Shearers’ Union in Wagga Wagga in 1886, Charlie Sullivan, knew the  truth when he wrote his memoirs forty years later:

Not one word is written of the thousands of workers who toiled in the heat, in the cold, and in the rain, who cut through rock and blasted channels, who reared great walls and buildings, not a word of the lives lost, of those who toiled with the crushed fingers of their calloused hands, dripping blood into the concrete, or staining steel. It has been thus from the time millions of straining naked slaves built that magnificence which was Babylon, and those monuments which are known as the Pyramids.

The names of kings and warlords are handed down in manuscripts and in books to after generations, but few ever think of the great and humble army whose sweat and blood are mingled in the concrete and bricks as surely as if the walls were built over a framework of human flesh.

They will remain unhonoured and unsung till workers write the histories that are taught in our schools.

Gathering here today we take a stand to inscribe Charlie’s longing for a red armband account of Australia’s past.

Although I have dwelt in the past, you would not have come out this morning if you did not know in your hearts that this is a monument to the living. When you lay your flowers you commit to a future where any murder for profit is outlawed, where class bias is no more, and where every human being flourishes through social equality. Until then, organised labour as the embodiment of Justice dare not lay down our sword.